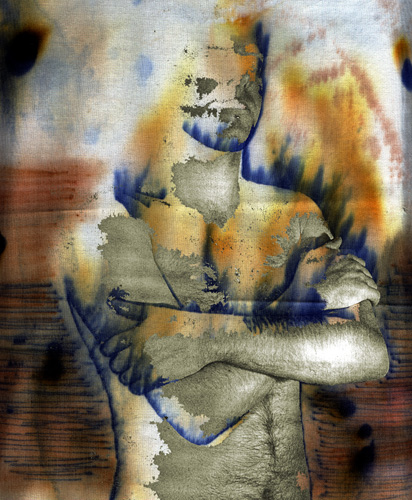 Ricardo Sleiman is a London based artist of English and Lebanese descent. He works with both paint and digital techniques, often blurring the boundaries between them. Working mainly with the human figure, usually his own, he alters its identity and manipulates its form, creating entirely new figures and beings. These new beings range from twisted forms of beauty and perfection, to grotesque creatures and genetic monstrosities.

Ricardo has pieces published in INSIDE artzine, on ‘Bride Stripped Bare’ by Rachel Kendall, and has exhibited in various galleries and unconventional spaces.
Having in 2005 completed a BA (Hons) Degree in Fine Art at University of the Creative Arts, Canterbury, Ricardo moved to London and became a partner with the art collective The People Speak, where he specialises in video editing and audio/video documentation.